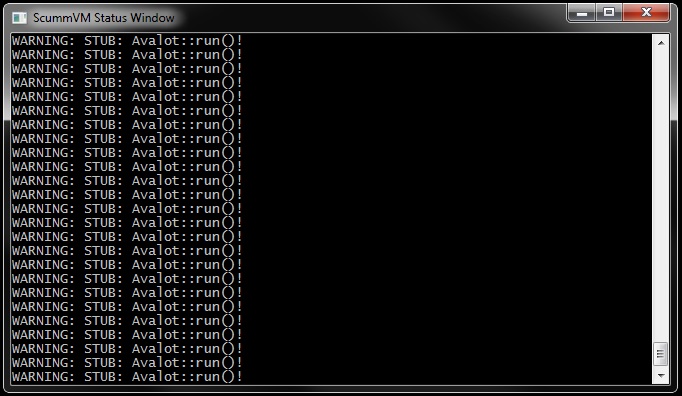 Just beautiful… But it’s a bit repetitive, isn’t it? 🙂
That’s the actual output of my project, as well as a blank main ScummVM window.
Although it doesn’t seem so (judging by the picture), I’ve made incredible progression (compared to myself) during the past three days. My engine is now up and hooked into the VM. (After many hours of struggling with the detection – Right, Arnaud? ;D)
Besides that, I also included the main loop of the game in avalanche.cpp and started working on the include files of the original sources what I’ll need in order to make the function run_avalot() (in the main loop) operate. (Which calls the method of the class Avalot you see in the picture, which will be responsible for the actual gameplay.) My first target was Gyro, what I stubbed heavily to make it behave, and during the following days I’ll keep on adding and working on these (now header, not include) files as fast as possible.
Listening to the advice of my mentor, I also reorganised the sources: I made a new folder for the already used and the not-yet used converted files and left the files I made myself in the root. I think now my work will be more followable for those who doesn’t have the MSVS2010 project file I use.