Yes, your eyes didn’t mislead you: another engine is – almost – ready to be added to ScummVM, yaay! 😀

My last week was spent mostly with bug-hunting and implementation of stubbed functions, so I really can’t highlight anything from it. I also implemented the functionality of the two volume switches on the toolbar. It was a pretty good experience, because I had a lot of freedom regarding this subsystem‘s implementation compared to other parts of the engine, since ScummVM’s sound handling is highly different from DOS’s. Because of that, new bugs and unwanted behavior is still possible when you use the sound options of ScummVM and the related buttons on the game’s toolbar in parallel, but that’s what testers for… ;>

After fixing some very ugly bug connected to script-handling, Sfinx is absolutely completable now. Here’s the proof – without too many spoilers: 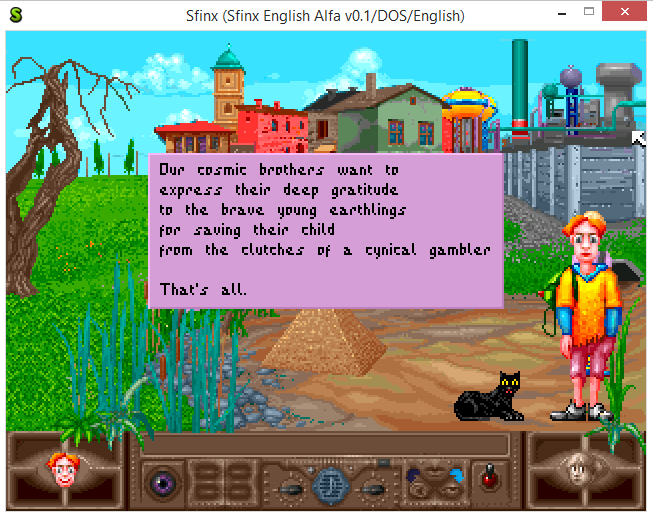 At the moment, we can say that the engine itself is almost complete too.
There’s only one more major bug about our coordinate-handling what affects the pathfinding, so it works a bit hectically. My plan is to get done with this issue during the next week completely.
Another nice-to-have thing is the autosave function. Now CGE2 only supports classic saving and loading (it gives you the opportunity to save or load anytime you want), but as Arnaud and Paul implemented in CGE1, I also plan to add an autosave save slot which will always be overwritten when the player exits the game, and the he/she won’t be able to delete this slot.
One more missing feature is the Return-to-Launcher support, but it’s really the work of a couple of minutes, thanks to ScummVM’s great system.

The most important thing now is the numerous memory leaks the engine still suffers from. I’ll concentrate my attention on this issue along with our FXP implementation during the upcoming days.

At last, but not least, the English translation is complete as well. Many thanks goes to Arnaud for this! Currently, Thierry is trying to improve it, so hopefully we can leave the “Alfa v0.1” tag from the ribbon of the ScummVM window soon. 😉

See you next week! 🙂