My recent sprite fixes PR includes a change that fixes the appearance of Stan (see the GitHub issue here). I found the method they used to produce the unmoving plaid effect quite interesting, so here’s a quick summary. 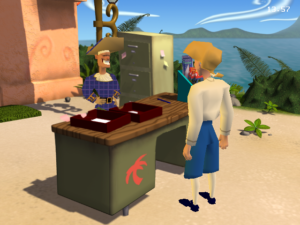 This is the final composition for reference. Note Stan’s trademark: the pattern on his jacket does not obey perspective. Although the effect looks simple, achieving this result with fixed-function OpenGL is actually not very straightforward. Let’s see how this image is produced. 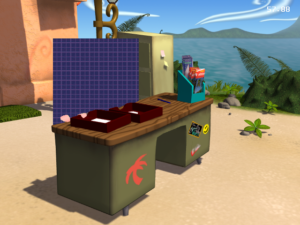 If we render the first background layer only, we can make an interesting observation. A rectangle covered with the check pattern of Stan’s jacket is part of the background. It covers all of Stan’s screen-space area. Stan moves back and forth during dialogue, but never leaves the area covered by this rectangle. 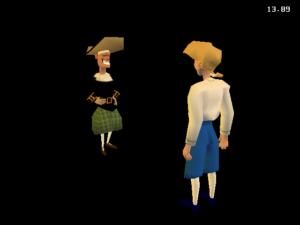 Here is a render with only the character models on a black background. We can immediately see that the jacket is not part of the model. Instead, Stan has a fully transparent texture where the jacket should be, so we can see through him. The transparent jacket is still drawn to the depth buffer, though. 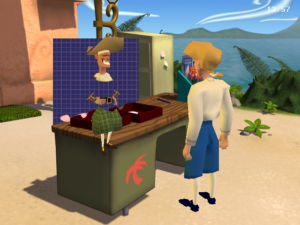 If we combine the first background layer and the character models we get a result like above. Since Stan’s model is partly transparent we can see the check-patterned background through him. Obviously something still needs to be done about the rest of the rectangle surrounding him. 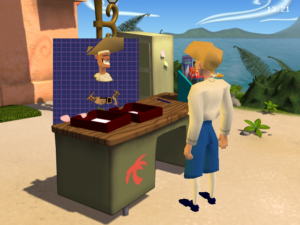 Above is an additional render with the rest of the background layers enabled. The desk is part of a background layer that is drawn over Stan, covering his legs. This image is similar to what ResidualVM produced before my fixes. 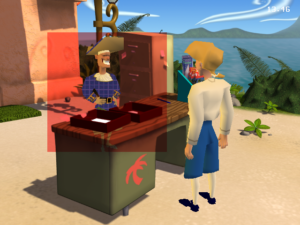 Here’s the trick. A sprite is rendered behind Stan, but over the background layer. I highlighted the sprite with red color in the above screenshot to make it stand out from the rest of the background. The sprite contains a chunk of the “real” background without the check-patterned rectangle. Since the sprite is drawn with depth test enabled, the sprite only covers Stan’s surroundings but not Stan himself.

This sprite was previously not drawn at all in ResidualVM, so the check-patterned rectangle was not replaced by the correct background around Stan.

This method works nicely since the backgrounds are static and the camera never moves. Other than a bit of overdraw, there’s also no additional rendering cost.