Wow, two months passed since the last post; real life took me some time (as this did – sounds great! -), but I’m now getting into development again.
Anyway, here’s the usual list of notable improvements (which are a lot):

These are the main things, but around them there are a terrific number of littler improvements and bug fixes.

I took this graph from Ohloh. It shows the number of committers over time. You can clearly see the boost that happened recently, and that imho is the most notable improvement the project had.

More than a month has passed since the last (and first) entry of this series. I’ve been a little busy with other things, but that doesn’t mean ResidualVM development was paused.
First of all, two new contributors stepped in to help the development:

Aside the usual bugfixing in the ResidualVM code I looked into a bug in the game scripts, a bug that existed since the Release in 1998 and that even Tim Schafer didn’t know of! This bug prevent(ed) a critical dialog with Domino at the end of the world to play, a dialog that explains the main plot!
I’ve explained what’s the problem behind the bug in the forum, with a possible fix. However, somaen recently added in ResidualVM the support for a new lab file, called datausr.lab, which takes precendence over the others. This allows for a better fix, not needing anymore to replace data000.lab. These are the needed steps:

Now when you run Grim you should see a dialog like this: 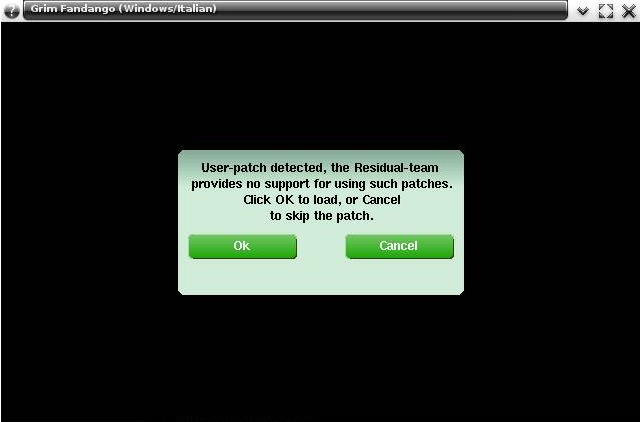 Now click OK and you’re up and ready to hear from Dom’s words his evil plans.

The residualvm-tools repository was born on April, 7th this year. From the very first moment I felt its build system was broken, mainly for these three reasons:

So some days ago I decided to try to improve it a bit, even though I never wrote a single line of a Makefile.

My first try was to work on rules.mk: I modified a bit the code that created a target from the value of TOOL_EXECUTABLE and of some other variables. After some trial and error I came up with a piece of code that allowed me to put in tools/module.mk, for each tool, something like this:

Quite ugly, but still better than before.

Then I started working on 3. Long story short, I couldn’t come up with an acceptable solution.

Then an heretic thought passed through my mind: CMake!
I really like the add_executable and add_subdirectory functions of CMake, but I know that porting to CMake would require a big effort, since it doesn’t work out of the box on all the platforms configure currently supports.
So I started thinking: configure works perfectly, I just need a way to confortably generate a bit of Makefile code. configure is an sh script, why not just use sh?

This script is called from configure and it simply generates a file Makefile.modules with the targets for the tools.

Now, adding a new tool is simply a matter of adding in tools/module.mg

You’ll then be able to call make toolname.

This is not finished and still experimental, and I can’t know if it will ever be actually used, but I would like to hear some thoughts.

This is the first installment of a periodic (I don’t know the frequency yet, could be weekly or monthly, or a mixture) series on what happens around ResidualVM.

First of all, if you don’t know it already, there has been some ferment recently around a project born on the forums aimed at improving the graphics quality of Grim Fandango, both improving texture quality, models and even making Grim widescreen!
You can read more about this on Johnny’s blog.

As regards the code, Einar (aka somaen) refactored the Smush code, making it more clean and maintainable. I finally implemented collision handling between actors when walking to a point. No more Manny walking through the signpost or Velasco or Glottis! Another worthy point, the savegame format changed, so if you had some saves made before the 3rd, say bye bye to them.

That’s it for now, stay tuned for the next updates!

Welcome to my shiny new blog!

Some of you may already know me, I’m a ResidualVM developer since some months ago and on this blog I’ll update you of the steps forward of that cute piece of code.

For those who don’t know what i’m talking about, ResidualVM is a sister project of ScummVM, thought for 3D adventure games. Currently it supports Grim Fandango only (which is completable), with Escape from Monkey Island starting to gain steam and engines for Myst3 and The longest Journey being worked on outside of the main tree.

But you can read more on ResidualVM’s site, wiki and forum.

Feel free to test it, report any bug and contribute to it!